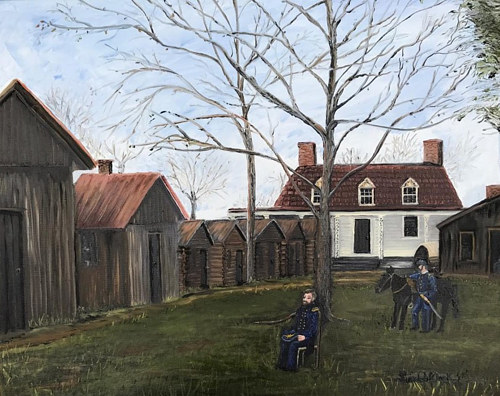 Appomattox Manor, an oil painting on cotton canvas. The original measuring 20 x 16 x 2 inches was completed in the fall of 2017.
I was inspired to paint Appomattox Manor for a project in my Civil War class taught by Stephen Walker at Southside Community College. In this class we are not only learning about the details that took place in the war but also visiting many of the locations of the Civil War.
Appomattox Manor is located in Hopewell, Virginia, once known as City Point. The port on the James River was once the busiest in the world. The land looking over both the James River and the Appomattox River was patented to Francis Eppe in 1635. The manor was first built in 1763 with several additions added over the years. At the time of the Civil War, Dr. Richard Eppes owned the plantation. He left the manor when it became the headquarters for the union soldiers. The port was used to supply the union soldiers during the 10-month siege of Petersburg. General Ulyssess S. Grant commanded his army at the location from June 1864 to April 1865.
Dr. Richard Eppes joined a local cavalry unit and later left the army to become a surgeon at a Confederate hospital in Petersburg. The Eppes returned to the plantation to restore their family home after the war. The Appomattox Manor was home to the Eppes family until 1979. It is now a historic home museum and is part of the Petersburg Nation Battlefield.