The Last Show Sold to a Ringling 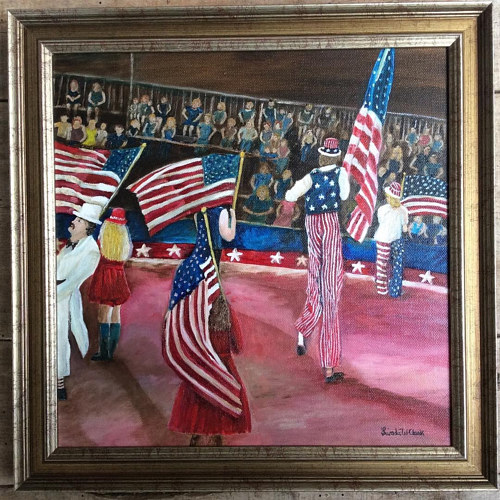 Artist, Linda W Clark of Victoria, VA was inspired and given permission to paint “The Last Show”, after seeing a post from her friend, Cindi @themustardseed205 on Instagram. Cindi shared that she and her family had gone and enjoyed the Kelly Miller Circus in the small town of Marble Hill, Missouri. The beautiful red white and blue photo she shared caught Linda’s eye, particularly since she knew at the time the Ringling Brothers and Barnum Bailey Circus had just held its last show in Richmond, Virginia. Linda completed “The Last Show” in 2017.

We have all been to a circus and enjoyed the faces of our children as they watched with excitement. This company, The Kelly Miller Circus, has been providing entertainment for nearly 80 years. The Ringling Brothers and Barnum Bailey Circus provided the best shows on earth, but in 2017 after 146 years the circus closed its doors. Linda’s desire was to paint a beautiful red, white and blue painting to honor both companies for all the entertaining years they have provided for our families for so many years!

Around Labor Day this year, Linda posted her painting on Instagram. She received a message from someone that told her she loved it. After a day or two she received an email at her Creative Works website from the same person, Rebecca Ostroff. Rebecca stated she was the blond with the red coat that was in Linda’s amazing painting.

She wanted to purchase a print, if available. You can imagine how surprised Linda was! I’m sure Linda could get Rebecca a print. Rebecca, an aerialist, was the Ringmaster of the Kelly Miller Circus. She was also in the movie, “Water for Elephants” a 2011 Drama in which she was spinning by her teeth.

A few days passed after this email, then Linda received another message from Rebecca asking if the original painting, “The Last Show”, was available. If so, she said, then John Ringling North, II would like to purchase a print for Rebecca, and he wanted to purchase the original for himself. John Ringling North, II, one of the last of the Ringling descendants to own a circus, bought the Kelly Miller Circus in 2007. This painting was special to them, Linda was told, because it was the last show for Rebecca as the Ringmaster and for John, because he was the owner of the Kelly Miller Circus. John retired from the circus business and it now is under new ownership.

Linda shipped the painting to Ardmore, Oklahoma to arrive by time John returned from Ireland in September. Recently, Linda received an email from him stating, “I saw the painting yesterday and I think it is fantastic”. Linda also received an email from Jim Dexhimer stating, “I love your painting”, and he enclosed two photographs (one shown above) of John Ringling North II next to Linda’s painting of “The Last Show” on the wall. 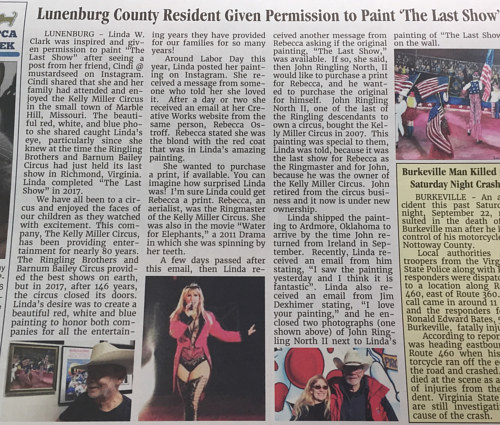