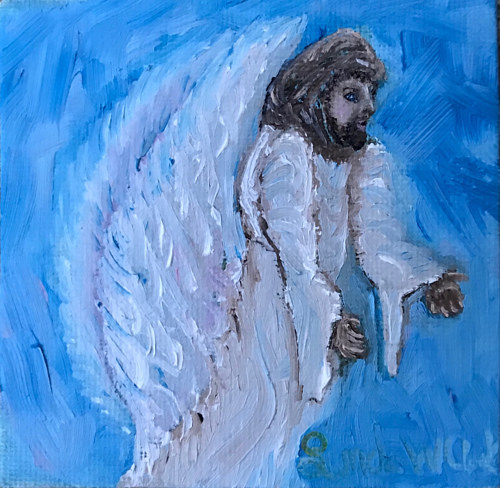 Who was Gabriel and why is he important?  He  was one of God’s archangels.  Angel you say???  Yes, God used angels in the Old Testament to appear to humans who would not be able to see Him and live.  They helped Him give deliverance, revelations, and His judgement.  We know from reading the Bible, Gabriel was a messenger.  “And the angel answered and said to him. “I am Gabriel, who stands in the presence of God, and was sent to speak to you and bring you these glad tidings.” Luke 1:19 He delivered a message to Daniel. “Gabriel, make this man understand the vision.”  Daniel 8:16.  He also delivered a message to Zechariah in Luke 1:13 “ But the angel said to him: “Do not be afraid, Zechariah; your prayer has been heard. Your wife Elizabeth will bear you a son, and you are to call him John.“ Zechariah could not believe for he had prayed for a son a long time and now as an old man his prayer was being answered.  Again  a shocking message was told my Gabriel,  the Bible’s tells us that Gabriel delivered a message to a young woman, named Mary in  Luke 1:26 -2 “ In the sixth month of Elizabeth’s pregnancy, God sent the angel Gabriel to Nazareth, a town in Galilee, to a virgin pledged to be married to a man named Joseph, a descendant of David. The virgin’s name was Mary.  The angel went to her and said, “Greetings, you who are highly favored! The Lord is with you. Mary was greatly troubled at his words and wondered what kind of greeting this might be. But the angel said to her, “Do not be afraid, Mary; you have found favor with God.  You will conceive and give birth to a son, and you are to call him Jesus. He will be great and will be called the Son of the Most High. The Lord God will give him the throne of his father David, and he will reign over Jacob’s descendants forever; his kingdom will never end.”  “How will this be,” Mary asked the angel, “since I am a virgin?” The angel answered, “The Holy Spirit will come on you, and the power of the Most Highwill overshadow you. So the holy one to be born will be called  the Son of God. Even Elizabeth your relative is going to have a child in her old age, and she who was said to be unable to conceive is in her sixth month.  For no word from God will ever fail.”  “I am the Lord’s servant,” Mary answered. “May your word to me be fulfilled.” Then the angel left her.

So you see, the angel, Gabriel, delivered the news of the most valuable gift we will every receive and what is so grand is this gift is for everyone who chooses to believe that God sent his Son, Jesus, who saves us from sin and to reign over God’s kingdom for eternity.  My wish is for you pick up your Bible and read the amazing stories of Gabriel this Christmas season and feel God’s presence in your life. Merry Christmas to you and your family!!

Gabriel is # 6 painting of my  challenge to paint 10 small paintings this Christmas season! You can find my first five paintings https://www.creativeworksoflindaclark.com/blog/