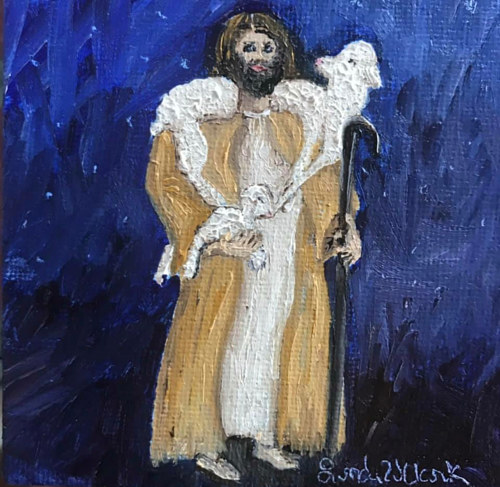 As we continue with the story we know that the angel Gabriel, delivered the message to Mary who was engaged to Joseph and that she was with child.  Joseph thought of leaving Mary but an angel visited him  during his sleep, telling him that it was true, Mary was conceived by the Holy Spirit and would have a son who’s name would be Jesus and would save his people from sin. Joseph and Mary traveled to Joseph’s home town, Bethlehem to register in the census that Caesar Augustus had issued a decree for.  While there Mary  deliver her first born son, Jesus,  She wrapped him in cloth and layed him in a manger.  Now, while the Shepherds were in the pasture watching over their flock an angel appeared telling them not to be afraid and gave them the good news.Luke 2:8 -11 tells us ”In the same region, shepherds were staying out in the fields and keeping watch at night over their flock.  Then an angel of the Lord stood before them, and the glory of the Lord shone around them, and they were terrified.  But the angel said to them, “Don’t be afraid, for look, I proclaim to you good news of great joy that will be for all the people; today a Savior, who is Messiah the Lord, was born for you in the city of David.”

Just a thought but why do you suppose the shepherds were the first to hear the good news?  Shepherds were not the rich and important.  They were just lowly people.  My thoughts are that the good news of Jesus’  was and still is for all people.  He is everyone’s savior if they choose to believe.  He is here for us while we are in our ordinary day, working or whenever we need him, just waiting for us to seek him.

The Shepherd is a 4 x 4 oil on canvas.  It is #9 of the small painting challenge,